Derby and Oaks to be run on same day

The Investec Derby is set to remain at its traditional Epsom home this summer after official local approval was given to the Jockey Club’s plan to stage the Classic on a Saturday in July or August and with normal public access to racecourse land forbidden for 24 hours.

At a special meeting of the Epsom and Walton Downs Conservators, the nine participating members gave universal backing to the proposal, removing fears the world’s most famous Flat race could leave Epsom for the first time outside of the two world wars.

Epsom will now work with the local police and other bodies to finalise the process whereby the racecourse would be fenced off around its perimeter, allowing a seven-race card, featuring the Derby and Oaks, to be held behind closed doors, in line with ongoing government instructions.

Boris Johnson’s administration has put a bar on sporting events taking place until at least the start of June, while Epsom general manager Simon Durrant told the meeting the ambition would be to stage the two Classics “roughly six weeks” after the resumption of racing.

Welcoming the conservators’ decision, Jockey Club group chief executive Delia Bushell said: “We are working hard on a practical and deliverable plan to stage the 2020 Investec Derby and Investec Oaks at their traditional home, without a crowd and once racing is approved to resume by government. I’d like to express my sincere thanks to the Epsom and Walton Downs Conservators for their backing today.

“These two Classics play a vital role in the thoroughbred racing and breeding industries, so it’s of great importance for them to be able to go ahead during this difficult period.

“Our teams now look forward to working with the British Horseracing Authority and local authorities to bring our plan to life.”

Given three of the nine conservators represented the racecourse and another was trainer Simon Dow, it was no surprise the Jockey Club was successful. However, warm words were also expressed by the councillors who sit as conservators, including Jan Mason, who said: “We should hold this close to our hearts.

“For me, this is the most famous race in the world. It is critical this race and the Oaks are run. I know it’s behind closed doors, but so be it. It’s vital for the industry, for the breeders, for the trainers and for everyone involved.

“We don’t want it to go elsewhere. It is vital that is held here.”

The metal fences that will be put in place around Epsom are intended to guarantee the fixture is free of spectators and also those members of the public who by a 1984 act of parliament normally have unlimited access to land within the racecourse site.

Durrant added: “We want to use a comprehensive communication strategy, ensuring it is clear our event will be behind closed doors this year.

“The message to our local residents, in particular, will be you can really support the 2020 Derby by staying at home and watching it live from the comfort of your own armchair.”

The seven-race card, which will be broadcast on ITV, will not include the Coronation Cup, this season provisionally due to be held at Newmarket on Guineas weekend, while the Investec Dash will not be possible as the first furlong of the sprint track falls outside the exclusion zone. 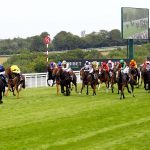