Fusil Raffles has Marsh in his sights

Nicky Henderson saw his highly regarded hotpot Chantry House finish only third at 8-11 in the 2m4½f novice chase but it was still a winning race for the champion trainer, whose Fusil Raffles stayed on dourly to overhaul Lieutenant Rocco in a slow-motion finish.

Daryl Jacob’s mount had been pulled up on Cheltenham’s Old course last month, but so, too, on the same day had stable companion Mister Fisher, who on Friday also bounced back to form to land the Peterborough Chase.

Henderson said: “Nico [de Boinville] said Chantry House got stuck in the mud, but it was a good performance by Fusil to give weight away. I have been dying to step him up to two and a half miles but the races kept falling nicely over two miles. I think he won here because he stays and he did it really despite the ground.

“Daryl said he had a hard race, so we’ll put him away now and then I would imagine he’ll have one run before coming back here for the Marsh.” 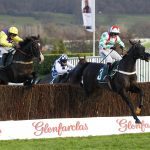