In the end, it was blindingly, brilliantly simple. The best horse won – and she won in style.

This had been a Unibet Champion Hurdle left bruised and battered by the court of public opinion, yet there emerged a most worthy winner in the shape of heavily backed 2-1 favourite Epatante, who added her now famous name to a roll of honour on which the names of her nearest and dearest have repeatedly been painted.

JP McManus and Nicky Henderson are by far and away the most successful owner and trainer in Champion Hurdle history, with nine and eight wins respectively in a crown jewel that has now been plundered on four occasions by Barry Geraghty, placing him alongside Ruby Walsh and Tim Molony. Unlike that pair, Geraghty has a serious chance of adding to his haul in 2021.

That is because Epatante is the one to beat in 12 months’ time following a dazzling destruction of 16 opponents by a mare who cruised into contention and led soon after the final flight before sprinting up Cheltenham’s hill to loud roars of approval from so many of the 60,664 people who attended the festival’s opening act.

They cheered a six-year-old who last year ran the one bad race of her life at the Cheltenham Festival. On that occasion she could manage only ninth when 15-8 favourite for the mares’ novice hurdle. It was a performance that deflated her team but their faith was restored when Epatante showed stunning speed on her Newbury return and again when upped to Grade 1 company at Kempton on Boxing Day.

A two-day coughing spell a fortnight ago worried some, but of more concern to Henderson and Geraghty was the gruelling ground on which this Champion Hurdle was staged. As Epatante left Sharjah and Darver Star trailing in her wake, those concerns were quite spectacularly allayed.

“She’s good, isn’t she?” said Henderson, whose opening-day double took him past Willie Mullins in the all-time festival wins table. “She was always travelling so well and Barry gave her a beautiful ride.

“I thought she would win here last year but she didn’t show up. She came back to Seven Barrows and fell to pieces. I sent her home looking dreadful. The people at JP’s Martinstown Stud sent her back to me looking a million dollars.”

Henderson added: “It seems such a long time since the first one in 1985. We have been very lucky to have the good horses – and she looked good the whole way around today. The top hurdlers jump with pinpoint accuracy and waste no time in the air. All my Champion Hurdle winners have been the same.”

This latest Champion Hurdle winner is ridden every day at home by Sophie Candy, whose work was praised to the hilt by her boss. “She is besotted with her,” said Henderson, whose winning rider is now almost certainly besotted with Epatante.

“I thought she would struggle on the ground,” said Geraghty. “I was worried about it all week but every step of the way she was a dream. It was a brilliant performance. She came up trumps.

“You can take them for granted a bit through the years. It’s when they win when you maybe slightly don’t expect it that you get the bigger buzz. I got a great buzz out of that.”

Also buzzing was McManus – but that had very much not been the case at around 5pm on the Thursday of last year’s festival.

McManus, celebrating his 69th birthday, recalled: “Prior to Cheltenham last year I said to Nicky: ‘Give me one for the week and I don’t care whether or not it’s mine.’ He told me: ‘It is yours. It’s Epatante.’ She wasn’t herself that day but things have worked out great with her since then.

“I thought a lot about that day at Newbury when she impressed me. I mentioned to Nicky then that maybe we should have a go at the Christmas Hurdle.”

“I was delighted Barry rode her with such confidence,” said McManus, adding with a smile: “I’d say she traded short on the machine.” 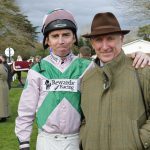