Hills happy Battaash is at his best for Abbaye

If there is one horse who might threaten to upstage Enable’s date with destiny, it could be electric sprinter Battaash, who is rated just 3lb inferior to the mighty mare and is absolutely brilliant when on his A game.

Lightning in the 2017 Abbaye at Chantilly, Battaash has been in blistering form this campaign and produced a career-best when blasting his Nunthorpe rivals at York in August.

Trainer Charlie Hills, who bypassed last month’s Flying Five in Ireland with Hamdan Al Maktoum’s popular five-year-old, said: “We’ve had a very similar preparation to York and we’ve been pleased with his work and he seems nice and fresh in himself.

“Missing Ireland gave us a chance to freshen him up and I think it’s done him good. It looked like he won easily at York, but no horse can do what he does and have an easy time of it.

“I’m happy with the draw in stall 11. Last year, when he was fourth, he was drawn closer to the rails, which forces you to do one thing, go forward. At least now we can choose what to do and have a couple of options.

“He’s won a couple of times on easy ground – it was soft at Chantilly when he won the Abbaye and his first King George at Goodwood was on horrible ground.” 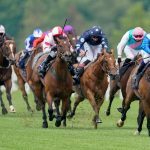