Few people gave Pyledriver a fighting chance but joint-trainer William Muir was so confident he predicted his stable star would win the King George VI And Queen Elizabeth Stakes two weeks ago.

The five-year-old was an 18-1 outsider in a field of high achievers, including winners of the Irish Derby, Juddmonte International and the Arc, but they did not land a blow as he scored by two and three-quarter lengths.

He beat Torquator Tasso, once again forgotten in the market just as he was at Longchamp last year, in this battle of the generations, with three-year-olds Westover and Emily Upjohn finishing fifth and sixth.

“I knew he was going to win two weeks ago,” said Muir, who will be driving the winner home. “He did a strong piece of work with a good seven-furlong horse. He gave him seven lengths but caught up and went away from him.

“I’ve never wanted to cry, but I do today. I didn’t care who was running. I know they said Westover was fantastic in the Irish Derby and they thought Emily Upjohn was terrific, but we also knew our horse was very talented.”

Pyledriver has taken his connections on a remarkable journey. He failed to fetch a reserve of just 10,000gns when sent to the sales as a foal, but has scored at Royal Ascot and won the Great Voltigeur in 2020 before providing Muir and Chris Grassick with their first Group 1 in last year’s Coronation Cup.

Since then he has taken them to Hong Kong, Saudi Arabia and Dubai, but he reached new heights at Ascot under PJ McDonald, who was deputising for the sidelined Martin Dwyer with Frankie Dettori aboard Emily Upjohn.

“He won at 50-1 on his debut at Salisbury and I told the owners not to let him run without backing him and we all did,” said Muir. “Then he went to Newbury and our old friend Matt Chapman said the form of his first race was bad, but he managed to finish fourth when drawn on the wrong side.

“He then won the Ascendent Stakes under PJ, who has a 100 per cent record on him. We’ve got to love him, but we do feel sorry for Martin, who told PJ exactly how to ride him.

“It’s been an amazing journey since then. I’ve never lost any faith in him and he’s just won one of the biggest races.”

And what does it mean to Muir? “In the early days, we won a five-furlong race here and were jumping around and partying in the car park,” he said.

“When he won the King Edward VI Stakes we were in the car park for so long I almost had to go home every day to train him. I don’t drink, and I’m not going to start, but there will be a big party. This was a big moment.”

It was certainly a big moment for McDonald. The rider was one of the main beneficiaries of a dizzying jockeys’ merry-go-round in the build-up to the Group 1, and while many hoped to land the ride, it was McDonald who was entrusted with it.

As one door closed for Dwyer – out of action following an operation on torn ligaments in his knee sustained during a freak gallops accident – another opened for McDonald, who was quick to pay tribute to his injured colleague.

“I feel so sorry for Martin,” said McDonald. “These horses are so hard to come by and I know what he’ll be going through. He’s an absolute gent and has been so supportive of me. He’s helped me so much in the last week and I’ll be sure to keep Pyledriver right for him for when he comes back.

“You work hard every day but don’t believe these days will happen. This came by luck. It was someone else’s misfortune and I’ve stood in, but I’m grateful for the opportunity.

“He went through the race like a knife through butter and I knew turning for home it would take a good one to beat him.

“I can’t believe it. During the final furlong I was thinking ‘where are they? Where are they?’ I was willing the line to come and thank God it did as he was running around in front.

“You wouldn’t believe how confident Martin was on the phone today. We had a game plan and everything just panned out.”

It was a fifth top-level success for McDonald, who has the rare distinction of having also won a Scottish Grand National, and he added: “This could be the last time I win a Group 1. I want to make sure I enjoy every moment.”

Joint-owner Roger Devlin suggested all roads will now lead to the Prix de l’Arc de Triomphe for Pyledriver, who was cut to 16-1 (from 66) by Betfair. 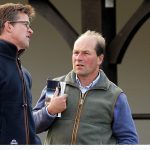