Ed Walker has always had an unshakeable belief in Starman but anyone who had caught the Lambourn trainer shortly before Saturday’s Group 1 Darley July Cup will have seen that belief, for the first time, slowly ebbing away.

It is fair to say Starman had his mind on other things in the parade, looking like he was doing his best to impress the females in the line-up, and when he was short of room and tapped for toe with three furlongs to run, his trainer’s mood was hardly improving.

Yet in Walker’s own words, Starman has never before let his trainer down and he was not about to blot his copybook here. First he muscled his way into open air under Tom Marquand before unleashing an exceptional turn of foot that took him to the front with half a furlong to run and hand Walker the first top-level success of his career.

“It’s taken time but it’s a great feeling and I kind of always believed so much in this horse,” said Walker, at the start of the second decade of his training career. “I put a lot of pressure on myself and on him because the belief was there, and it’s great when it’s vindicated.”
Heavy ground caused Starman to miss his intended target of the Diamond Jubilee Stakes at Royal Ascot last month, and Walker admitted he thought things were going astray once more.

“At York [in May] he was so professional but today he wasn’t concentrating before the race,” said the trainer. “If you’d caught me then I’d have been very doom and gloom.

“Then it wasn’t happening in the race. I was feeling sorry for myself at the three-pole thinking it’s more bad luck in a big race, but Tom was great and didn’t panic and as soon as he hit the rising ground at the one-and-a-half-furlong pole he just found and found and found.

“I actually watched down at the one-pole and as he came past me I thought s**t he’s still got quite a lot of ground to make up here, but he did it. He’s never let us down.”

If it was painful for Walker to watch, spare a thought for the man on top, who did not appear to be going anywhere fast at halfway but ultimately found himself winning the third Group 1 of his career in Britain.

“That was a top performance,” said Marquand. “They had me in a bit of trouble at the three-pole, where you start running downhill. As these top-class sprinters were quickening, it all got a bit tight. He’s very inexperienced compared to a lot of these, but my god he had a turn of foot when he hit that rising ground and that last 100 metres is the one that counts.

“It’s fantastic for Ed and the team to find a top-class horse after last year and the excitement and then the disappointment of English King. It’s so well deserved and this horse is an absolute star. The owners are the biggest supporters of the game. They are just down to earth, lovely people. They’re understanding and just love racing.”
It was certainly fairytale stuff for winning owner-breeder David Ward, a big David Bowie fan who was hitting the Group 1 heights with just the second horse he has bred.

Perhaps in a daze, he cut a far calmer figure than his trainer as he reflected on Starman’s heroics.

“This is what dreams are made of,” said Ward, whose luck was out when Primo Bacio suffered trouble in running in Friday’s Group 1 Falmouth Stakes.

“He’s the second horse I’ve ever bred and is just so unbelievable – probably the horse of a lifetime. One of the worries was getting through the 19 runners and not always the best horse wins when there are traffic problems, but he managed to get through.

“We always believed he was a seriously talented horse and he is, but you’ve got to come to these places against tip-top competition. He’s just realised everything we wanted him to. I’m just a passenger and the lucky chap who’s managed to come along on the trip.”

The next destination on that trip could be Deauville at the start of August for the Group 1 Prix Maurice de Gheest, according to Walker, which means a potentially seismic rematch with runner-up Dragon Symbol could be on the cards.

If it is half as exciting as this match-up, we are in for a treat. 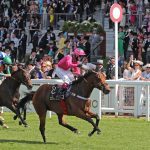 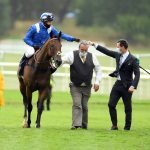