Alpinista, Pyledriver and Deauville Legend were on Thursday among ten British and Irish nominations for the Japan Cup on November 27.

The Japan Cup was singled out as a potential swansong for Alpinista after she provided Sir Mark Prescott with his first success in the Prix de l’Arc de Triomphe this month, while the race remains a target for Pyledriver, who missed out on Longchamp with a soft-tissue injury.

After missing the Arc, it was hoped Pyledriver, who won the King George VI and Queen Elizabeth Stakes last time, could return for the Breeders’ Cup Turf on November 5, but that comes too soon.

Instead, he will be trained for the Japan Cup but will be given the options of December’s Longines Hong Kong Vase and the Group 1 Sheema Classic, in which he finished fourth at Meydan in March.

“We thought he might be back for the Breeders’ Cup but he wasn’t – it’s just one of those things,” said joint-trainer William Muir. “He’s in the same routine, which involves plenty of exercise and swimming.

“It’s frustrating but we’re not putting a time frame on anything. He looks marvellous but we’ll wait until he’s 100 per cent. If we can get him ready for the Japan Cup, he’ll go, but if not we have options.”

Pyledriver could be joined in Japan by Deauville Legend, who arrived in Australia two days ago for a tilt at the Lexus Melbourne Cup. The three-year-old is among the favourites after winning the Group 2 Great Voltigeur Stakes by two and three-quarter lengths in August.

“He’s in great order,” said trainer James Ferguson. “There’s a great bonus, so he’s in the Japan Cup, and will also be in the Hong Kong Vase and Cup, but he’s not certain to run. He’ll have to perform well in Australia first.” 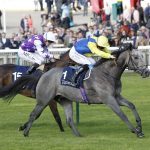